Of equal importance to planting, is the ongoing removal and management of nonnative invasive species which damage your habitat or restoration goals. Invasive species are a national threat to natural areas because can outcompete native species.  They are evaluated by their ease of removal, extent and persistence in the landscape.  Some common invasive species include: Oriental Bittersweet and Honeysuckle, Mile-A-Minute, Mugwort, Norway Maple. Yet Common Milkweed, Trumpet Creeper, and Goldenrod are native aggressive species, but they also have great ecological value for wildlife, and can potentially outcompete the more invasive exotics.  To complicate things, many introduced species have become part of a new evolving food chain. They don't overpopulate they fit in.

Have you ever walked along a trail that is boring? Mostly likely, it's dull because the trail went too straight, and  had no proper views. Have you ever been to a park, and saw an ugly red sign blocking an otherwise pristine view?  Have you ever appreciated an illustration of a natural setting?  Management of natural plant communities, natural landscapes, and the trails and roadways accessing them,  complimented by design processes add beauty to the scope of the project.

Pollinator gardens or rain gardens focus attention to singular aspects of a natural landscape. Their primary use of native plants qualify them as natural landscapes with additional focus on aesthetics and blooming times.  Native grasses can be added to provide additional wildlife cover and habitat, but the primary focus is on wildflowers.  Rain gardens are designed with a variety of native plants that are best suited for areas of poor drainage. Beautification plantings may incorporate natural settings and/or include spot plantings of native plants.  Drift plantings may mimic natural colonizers such as common milkweed, or may be grouped together in colorful arrangements. 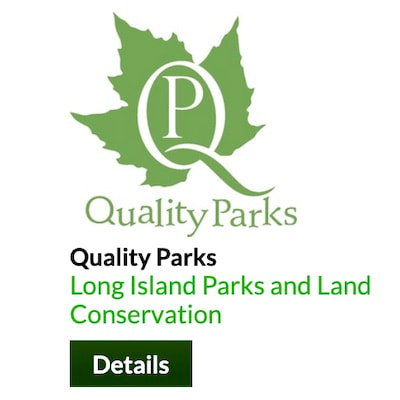 ​​Long Island Habitats and Ecosystems, contributed by Chris Duffner, Master Naturalist Graduate & Instructor
Ecosystems can be divided into two categories:   Terrestrial ecosystems And Aquatic ecosystems. There are many types of terrestrial ecosystems and three major categories of aquatic ecosystems: Marine, Freshwater, and Estuarine.
Terrestrial ecosystems/habitats  are typically described by the dominant type of plant or plants present in that ecosystem or habitat. This is simply because the plants are the most obvious thing present. Also, factors like climate, micro-climate, soil characteristics, micro-biota etc. determine the dominant plant community. The plant community, in turn, dictates the type and variety of fauna.

Pine Barrens are another type of forest found on Long Island. Pine Barrens are a “fire climax” ecosystem with porous, acidic, nutrient-
poor soils. The pine barrens are dominated by two fire adapted tree species: Pitch Pine and Scrub Oak
Long Island’s “Central Pine Barrens” occupy about 100,000 acres in eastern Brookhaven, southwestern Riverhead and western Southampton townships. This is but a fraction of the space this ecosystem once occupied, stretching all the way from eastern Nassau County to the present Location.

About 2500 acres of the Central Pine Barrens is the

​Dwarf Pine Plains. This ecosystem is south of the Ronkonkoma Moraine in the Westhampton area. The Dwarf Pine Plains contain a stunted mixture of Pitch Pines and Scrub Oaks which only grow to a height of 6-8 feet. When a fire occurs here, the forest literally
“burns to the ground.” These pitch pines have adapted to this situation by having nearly 100 % of their cones of the serotinous variety. The cones protect the seeds from the intense heat prior to opening as a result of exposure to that heat.

​Shrub layer and herbaceous layer plants in the pine barrens can include: Bayberry
High-bush and Low-bush blueberry Black Huckleberry Bearberry
Pine Barrens Heather Wintergreen
Prickly Pear Cactus
Flowering Prickly Pear Cactus, penssyvania sedge, hair grass, and many other species.​Maritime ForestsAs the name implies, these are forests that exist in close proximity to the sea, (ocean, bay or both.)

Grasslands, Fields, and Meadows depend on disturbance and history. Long Island has a variety of open grassy areas with a mix of native wildflowers. Note: We've also classified a wet meadow under freshwater wetlands.  Learn more

Freshwater Wetlands are periodically flooded or saturated, with saturated soils most of the year, and with plant species are adapted to wet conditions. They can be bogs,  wet meadows, marshes, swamps, ponds, lakes, rivers. Learn more

The geologic events that most dramatically formed the surface features of Long Island were those occurring during the continental glaciers of the Wisconsinan age (20-86 thousand years ago).  Two terminal moraines formed by the deposition of glacial debris at the maximum advance location of the glacier, which were carried from the north as the glacier advanced retreated and advanced again. The older of the two is known as the Ronkonkoma moraine, and the younger of the two is known as the Harbor Hill moraine.

The glacial outwash is essentially large deposits of highly permeable sand and gravel which overlie the Magothy Aquifer reaching depths of 700 feet in some areas. As the continental glacier retreated, large chunks of ice and debris would fall off the terminus- very similar to the large pieces of ice that fall off Alaskan glaciers into the sea.  These large ice chunks would make depressions in the terrain.  Those depressions that filled with groundwater became the kettle lakes (Lake Ronkonkoma, Lake Panamoka and many others).

Some of the most noticeable postglacial changes to Long Island occur along its miles of shoreline.  Constant wave action, winds and storms have eroded and reshaped the sandy shoreline features created by glacial deposits and melt waters.  Winter storms and hurricanes make drastic modifications to the shores, sometimes carving new inlets across the barrier islands of the south shore.  The inland of Long Island is also under constant postglacial reconstruction by its rivers and streams, albeit at a much slower rate than at the coastline.

Another geological effect due to sandy pine barrens soils is fire in the landscape.  Begin with understanding vegetation structure from a firefighter’s point of view, thinking in terms of ladder fuels (how fire can spread up from grass into shrubs and low tree limbs), applying  the fire triangle (fire weather, fuels, and topography). The pine barrens is a fire prone community. With changing climate (increasing temperatures and more drought), even less prone fire communities can have wildfires. Fuel loads consider dead and live fuels and their density both horizontally and vertically.