Encounter the rich complexity and diversity of marine environments typical of Long Island. We will also delve into marine stewardship such as shellfish restoration and in general how it relates current aquaculture practices. We’ll also discuss hurricanes and related survival skills. 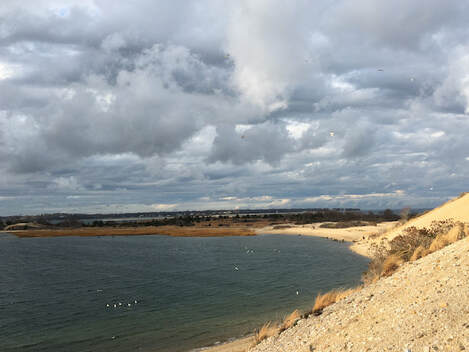 ​Marine habitats include: the coastal forest, bluffs, beaches, rocky shores, estuaries (most productive and nursery for many species), tidal wetlands, salt marsh, intertidal zones,  and ocean layers. The salt marsh is contains predominantly grasses adapted to living in brackish conditions. Tidal influences vary throughout the year. Beaches also have zones from beach grass to upland habitats. A variety of marine and coastal animals are monitored to indicate population trends. Some of these species include fish, marine invertebrates (no spine) and shore birds.

The piping plover is classified under the endangered species act as a protected species. It’s is a useful indicator of the health of the beach habitat.  Plants and animal life have specific adaptations to their environments. In coastal areas, life that lives in the intertidal zone is exposed to the air at each low tide cycle. Some plant species are adapted to dry soils and windy conditions with succulent or narrow  leaves. Some plants like beach pea is a nitrogen fixing plant, so that it can do well in poor sandy soils.

As an environmental indicator, "since horseshoe crabs rely on beaches and the shallow intertidal environment to produce their young, their abundance is an indicator for the health and productivity of this transitional environment."  - ​LI Sound Study - Horseshoe Crab Abundance

Contributed by Chris Duffner Master Naturalist Graduate & Instructor
Many North Shore Beaches as well as parts of Montauk Point are Cobble Beaches. They are covered with gravel, pebbles, rocks and large boulders called Glacial erratics. These large boulders were dropped as the glaciers that formed Long Island melted and receded. When the Montauk Point Lighthouse was originally built, it was quite a distance from the edge of the cliff where it now resides. Erosion at Long Island’s eastern end produces a steady stream of sediments that are transported from east to west. Most of the sediment travels along the south shore, building “spits” and barrier beaches along the way. The lighthouse at Montauk Point is now precariously close to the edge of the cliff.

Contributed by Chris Duffner Master Naturalist Graduate & Instructor
As the name implies, these are forests that exist in close proximity to the sea, (ocean, bay or both.) Normally, trees of any kind have a difficult time surviving close to the salt spray and in the sandy soils that usually occur there. So, it requires some unique conditions for Maritime forests to exist.

The “Sunken Forest” on Fire Island National Seashore (FINS) As well as the forest adjacent to the “Walking Dunes” at Hither Hills State Park in Amagansett/Montauk are examples.
On Fire Island National Seashore, where the Sunken forest exists, a massive double line of dunes has evolved.
Between the dunes, enough organic material has been trapped to support the growth of a Maritime Forest.
There is also a lens of freshwater beneath this area that helps to sustain the trees.
The high dunes temper the salt spray and desiccating winds.

The Sunken Forest is dominated by American Holly and Sassafras – normally, these would be under-story trees.
Sassafras trees reach some of their largest sizes here – note the deeply furrowed bark
Clockwise from top left: Catbrier, Low-bush Blueberry, Virginia Creeper and Poison Ivy
Wetlands on Long Island - where land meets water

Long Island is surrounded by estuaries. For example, the expanse between the barrier beaches/islands and the mainland has produced incredibly productive estuaries. The “Great South Bay” is approximately 1500 square miles of estuary between Fire Island and the mainland in Suffolk County. The north shore of Long Island is inundated by many inlets , coves and harbors. These provide protected areas for mooring watercraft and are also home to salt marshes.​ 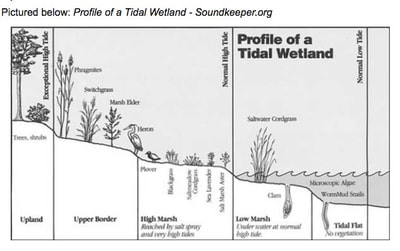 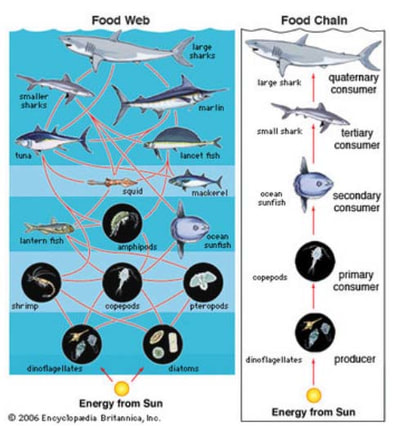 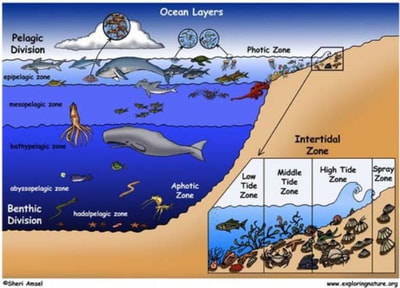