Back To About Us
If you're not familiar with this park, search by keyword in the Parks Directory to become better acquainted.
Last updated: May, 2019
2019
These photos (below) were taken on May 7, 2019 at the Rocky Point Pine Barrens State Forest. It was set aside to protect and preserve these lands forever as a nature preserve.  "Starting April 1, 2019, DEC contracted fire break construction and maintenance on old historical fire breaks on this property. This work is now complete," quoted from their web page.  Historical is no excuse for common sense, ecological best practices. Especially if you review the video above, their fire break is a stone's throw from the road.  ​ 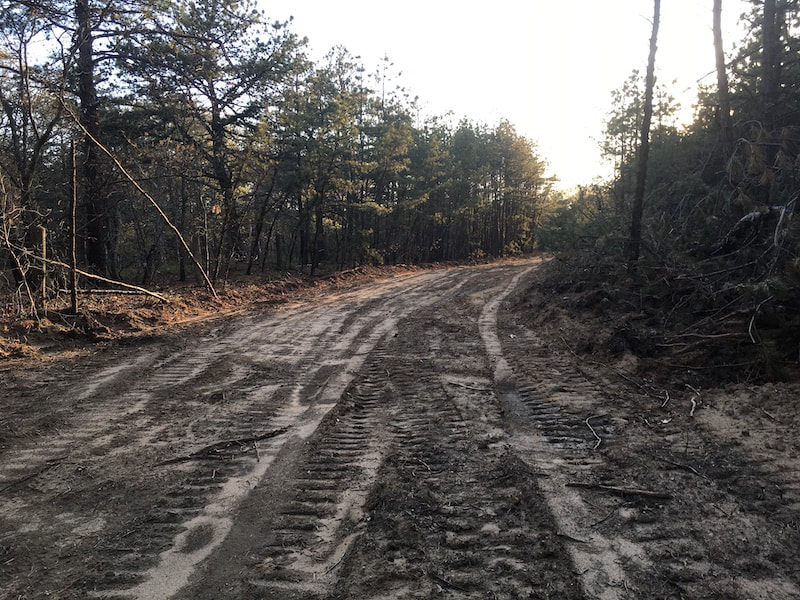 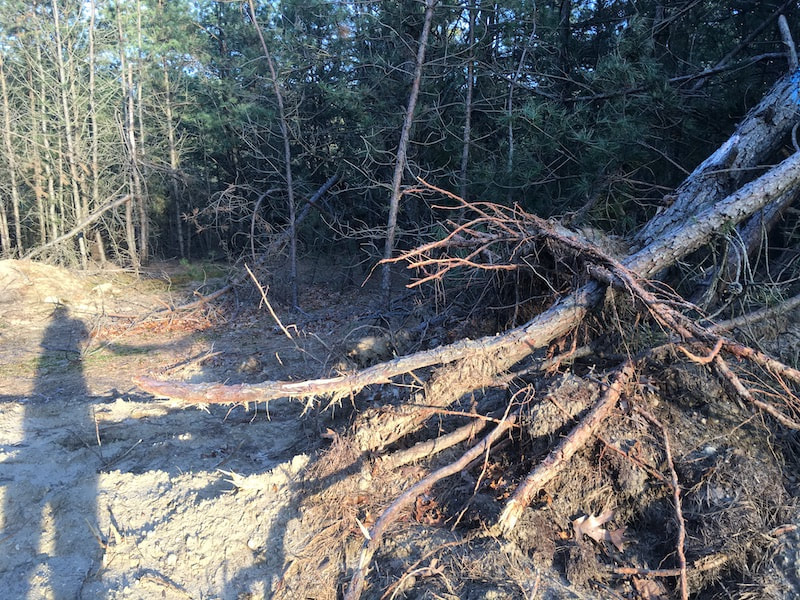 June
June - Measurements were taken along the interior administrative road that parallels Whiskey Road. The yellow access gate is 11' feet wide. The road cuts varied from 9.5 feet to 19 feet wide (data points in feet: 10.0, 10.5, 19.0, 12.0, 11.0, 9.5,12.0,12.0,16.5,12.5,10.0)
May 19: How wide? When interior, administrative roads cause more environmental damage than a 100 foot reroute of trail, why are volunteer trail maintainers set to a higher standard than NYSDEC?  When the Pine Barrens Law was enacted, it allowed for public land managers to have the authority to maintain existing and administrative roads. BUT if this were a development project, it would be under review. How wide do these interior roads have to be?  And what about minimizing environmental impacts, since it is, after all, a designated NYSDEC State Forest Preserve within the NY Pine Barrens.  Quality Parks is researching NYSDEC interior road standards, while taking the "higher road," for upcoming trail repair. 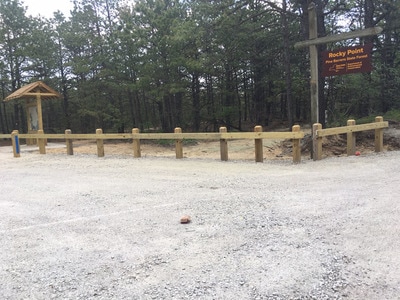 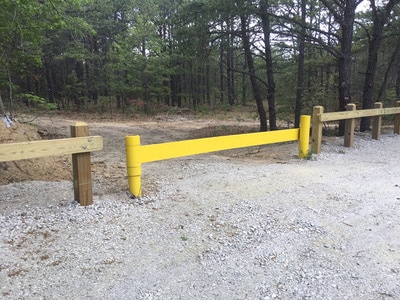 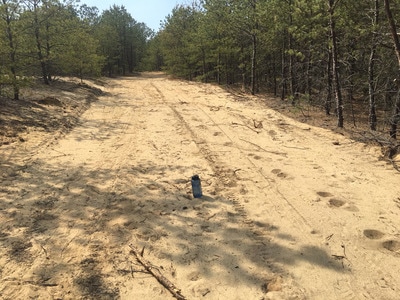 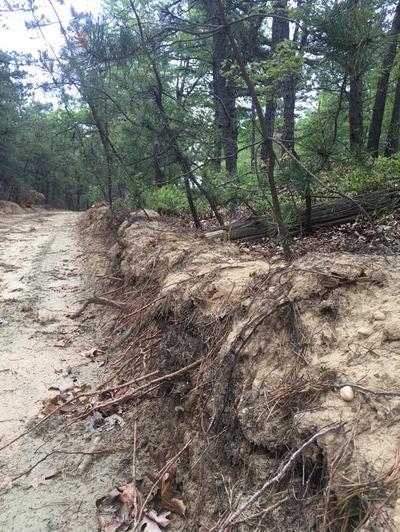 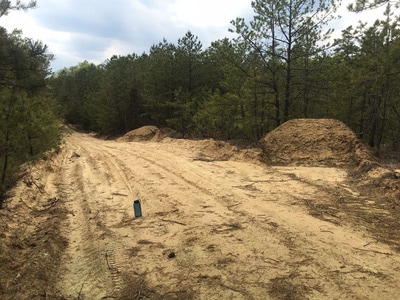 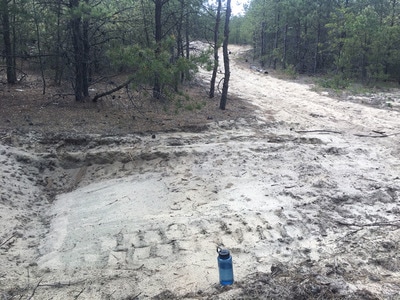 April 25-May 2- More Discussions:  "Is there any old or rarely used trails/roads that you know of that could be closed off in Rocky Point? . . . It probably doesn't warrant a reroute. 100 feet of trail erosion can be fixed by adding rolling grade dips to move the water off the trail before it heads down the hill. Other methods can be used to repair the section but as I recall the hikers stopped maintaining that section years ago due to motorized users abusing the trail. Many things to consider before immediately jumping to one conclusion or the next. ... Thanks, that's my opinion also. . . He said fill was still needed, and a borrow pit to acquire the fill - as hauling in dirt from offsite is too labor intensive.  My thinking also, as that hill is too steep and some filing and rerouting is necessary to create the RGD, but less fill than the water bars. . . Sounds good."
​​April 14: We also visited the Southern Pine Beetle Project funded by a grant received by the US Forest Service, which is also on NYSDEC Rocky Point Pine Barrens State Forest. ​​

So far, more than 10,000 trees have been cut in the Core Preservation Area in suppression efforts to slow the spread of SPB and protect surrounding trees. For updates on DEC's SPB efforts, see the most recent operations update report in the SPB Operations Update section.  - NYSDEC Southern Pine Beetle

February
The access trail from Parking Lot #18 to Paumanok Trail going north, has a steep eroding section which is not sustainable (see Trails, Greenways & Sustainability). Near the Rocky Point Pine Barrens State Forest sign is an illegal access point in need of closing off, as was done on the other side of the parking lot with a yellow gate.​Eastern Fire Road was reopened with bulldozer scraping, within the last year. A north eastern field is being managed by NYSDEC Wildlife to reopen a grassy area in preparation of a prescribed burn. 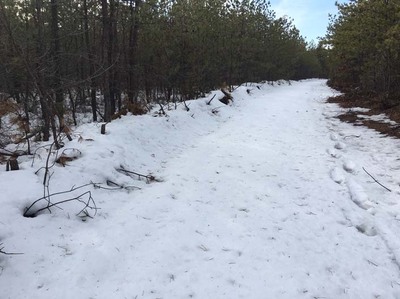 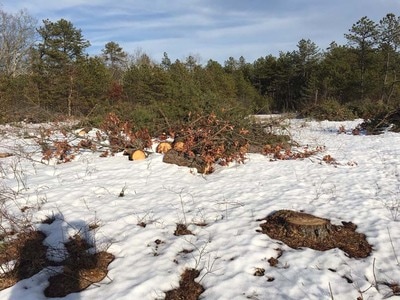 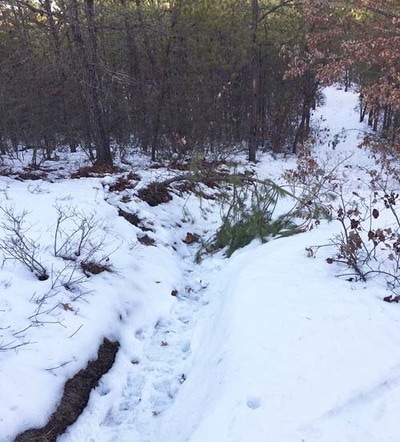 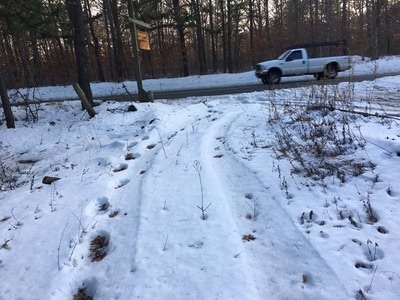 Illegal access point.
2016-2000
Many hours of support, needs updating at a later time.